A new generation of intergrated solutions 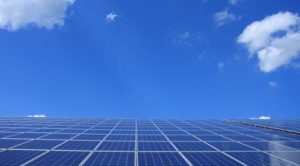 As the energy landscape evolves, it becomes increasingly clear that the most effective way for businesses to reduce energy costs, ensure supply resilience, and move towards carbon neutrality is the implementation of a comprehensive smart energy strategy. Powerstar not only manufactures technologies that are an integral part of such a strategy, such as voltage regulation, energy storage, and smart distribution transformers, underpinned with remote monitoring capabilities, but can also source and integrate generation technologies such as Combined Heat and Power (CHP) and solar as part of an all-encompassing solution to meet the client’s needs.

Many businesses have already invested in CHP technologies to become more energy efficient, and are therefore hesitant to invest in further technology that they feel may displace CHP and eliminate the possibility of seeing a return on the initial investment.

However, energy storage represents a viable solution for businesses in this predicament. This is because energy storage can be integrated alongside CHP and does the opposite of displacing it, the integration of energy storage instead optimises CHP and can enable it to run more efficiently.

The below graphs show an example of how storage can optimise CHP and enable it to run a more efficient profile, which can be lucrative, and, in this particular instance led to additional value in excess of £100,000 per year.

Not limited to a single form of generation, energy storage can also maximise the usage of solar (PV) arrays by storing energy at peak generation times for use at peak consumption times.

This integration ensures that excess solar generation is neither exported nor wasted and can be stored at a later date. This has the twin benefit of allowing users to reduce energy costs by reducing energy imported from the grid at peak times and also reducing carbon emissions through the greater usage of renewable energy.

The below is a visual representation of the process of the optimisation of the solar array as it is generated, stored, and used. 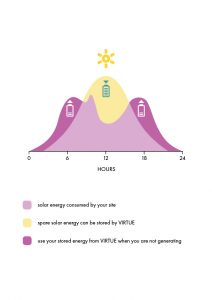 Solar can also be integrated to smart distribution transformers, such as Powerstar SO-LO, to directly connect generation from solar PV sources to the electricity grid and give much-needed insights into a critical piece of electrical infrastructure.

As the need for a comprehensive energy strategy grows as the energy transition accelerates, Powerstar has ensured that such a strategy can be implemented across a variety of key technologies and is not limited to Powerstar manufactured technologies. Whilst Powerstar does not manufacture CHP and solar technologies, partnerships and agreements in place with numerous suppliers means Powerstar can help you source such technologies for integration with the wider smart energy strategy, ensuring a fully connected, all-encompassing solution.

This is vital as an effective strategy is unique to the requirements of each site, the technology that is already in place, and must exist to reach the short- and long-term sustainability goals of the organisation.