Over the last 6 years, the demand for electric vehicles (EVs) in the UK has increased significantly, with new registrations increasing from 3,500 in 2013 to over 200,000 by the end of 2018 and numbers now reaching 247,000 so far in 2019. Following this surge in demand, the number of pure electric and plug-in hybrid car models that are available in the UK has also increased, with many of the top UK manufacturers now offering EV models.

Figures published by the Society of Motor Manufacturers and Traders (SMMT) each month show sales in the UK rising dramatically in recent years. During the first half of 2014, approximately 500 EV’s were registered each month, however during 2018 this increased to an average of 5,000 vehicles per month. At the end of 2018, the UK even hit a new record with almost 60,000 registered plug-in vehicles throughout the course of the year, beating the previous record of over 13,000 units in 2017. 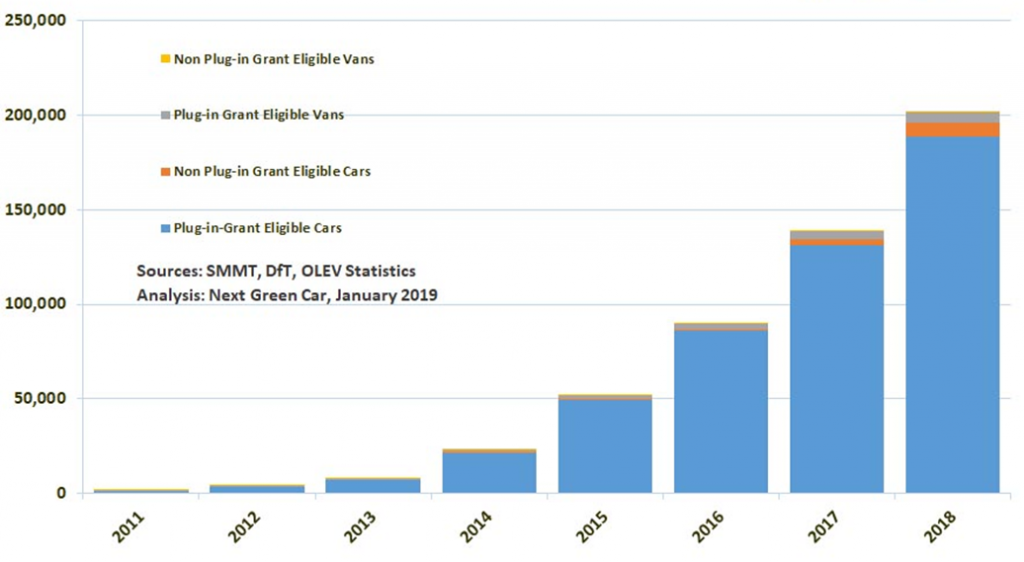 As a result of sustained government and private investment, the UK network of EV charging points has risen from a couple of hundred in 2011 to over 10,172 charging locations, 16,283 charging devices and 28,069 connections by November 2019. Not only are there generally more charger points within the UK, but the proportion of charger types has also changed dramatically with a surge in high power (rapid) units being installed.

Recent information, captured on 12th November 2019 showed that there were 6,500 rapid chargers on the UK network, with 109 rapid charger devices being installed within the previous 30 days. These statistics equate to 259 new rapid charger connections, showcasing the exponential growth of the UK charging network.

This number is expected to keep growing as the demand for faster and longer ranging electric vehicles is set to increase. Rapid charging units (43-50kW) is a preference for many users as they are able to provide a standard electric vehicle (23 – 30kWh) with 80% state of charge (SoC) in approximately 30 minutes [1]. Despite the benefits, rapid chargers do have limitations as they can only be used in areas where the supply can tolerate an unexpected sudden load, which is restricted in areas due to network constraints in the UK which means that even medium-sized commercial companies will struggle to charge more multiple cars simultaneously through rapid charging using their current grid connection.

Despite the surge in this market, the wider adoption of EV’s is still somewhat restricted. Range anxiety is a core issue due to the majority of EV’s only being able to achieve a third of the range of a standard fuel-consuming car. This is mainly due to the battery capacity within EV’s, driven by cost and space restrictions.

Interestingly, EV batteries are being developed with larger capacities, with the popular 2016 Nissan Leaf’s 30kWh battery scaling up to the 40kWh version in 2018, alongside the range increasing from 107 to 150 miles. Nissan isn’t alone with this evolution, as both Tesla and BMW are providing 40kWh battery-size vehicles. However, even though these industry-wide improvements are a step in the right direction for diminishing range anxiety, they further exacerbate issues surrounding demand due to a larger EV battery needing a proportional increase in energy from the grid.

To further compound things, charging time is another sticking point, as to fill up a tank of fuel usually takes a maximum of 2-3 minutes, whereas to charge an electric vehicle, it will take at least 20 minutes through a rapid connection, and more than likely over 8-12 hours if charging at home. How fast a particular vehicle can be charged and how much available power there is, affects charging time. The Energyst’s 2019 EV report showed that more people are considering installing rapid and slow chargers, however the challenge is whether the infrastructure is in place to be able to accommodate this, as previously mentioned.

A final major restriction to the adoption of electric vehicle is the price. EV’s are substantially more expensive than internal combustion engine vehicles, removing them from the low-level vehicle market. Additionally, EVs are still not commonplace on the second-hand market, although this is improving with an estimated 27,000 entering the used car market in 2018, compared to 8,000 in 2016 [2]. However, despite electric vehicles being expensive, the Office for Low Emission Vehicles (OLEV) has administered a plug-in car grant to encourage the uptake of electric vehicles in the UK by helping reduce the initial cost. Through this grant, originally introduced in 2011 and recently updated in October 2018, EV buyers will be offered a maximum of 35% discount or £3,500 off the total purchase price on all eligible plug-in vehicles [3].

Staggeringly, recent analysis by research company cap hpi demonstrated that some EV models are actually appreciating in value after one year’s ownership, a striking contrast to the notorious depreciation of internal combustion engine vehicles. This prohibits a low-level market developing as used cars maintain and even increase in value in the world of EV ownership.

Unfortunately, convenience is prized above all else in the UK, so all of the above issues are seen as an inconvenience and barriers to adoption. In order to rectify these issues, manufacturers will need to increase vehicle capacity, the speed of charging points and reduce manufacturing costs whilst the UK resolves its ageing infrastructure issues.

The Future Strategy for Electric Vehicles

Car manufacturers continue to increase the capacity of electric vehicles, with more vehicles now being in excess of 250 miles. The vehicle with the longest claimed range to date is the 100kWh Tesla Model S with a range of 375 miles.

In order to achieve the same range of a standard internal combustion engine vehicle, a saloon or hatchback vehicles would need a battery size of approximately 150kWh and 90kWh respectively. Therefore, each car would need 300kW and 180kw chargers to charge them under 30 minutes (0-80% in approximately 20 minutes). If manufacturers choose to go down this route, which is believed to be essential for wider adoption, new and more significant issue arises.

To be able to charge these vehicles at the preferred rate, even more energy will be required on-demand, posing a threat to the local and national grid infrastructure as the demand for power will increase. To accommodate high-power chargers, which will introduce multi-megawatt power swings at specific times of the day, the grid will require immediate available capacity whenever these swings take place.

There are essentially 2 options to cater to the surge in demand. Firstly, through introducing more flexible generation to deal with the spikes from the chargers and the supporting mechanisms to underpin this, whilst also favouring clean generation to assist in meeting net zero goals. Secondly, local storage could be deployed to balance generation and consumption whilst taking the strain of the sudden requirement to discharge when a vehicle needs charging, therefore elevating any pressure from the grid.

All things considered, a combination of both options, that is the co-location of generation with battery energy storage, would be the most beneficial and cost effective for the network and support 2050 zero net targets

At a site level, Powerstar can assist businesses with its VIRTUE EV technology which is a fast/rapid EV charging solution with integrated battery energy storage and solar. By supporting EV charging with energy storage technology and renewables, demand on the grid caused by charging can be lessened and stored energy used instead. This helps to avoid costly infrastructure upgrades, which are currently needed to support a mass adoption of EVs. This also comes with a multitude of other benefits inherent in the adoption of energy storage technology, such as maximising on-site generation (including renewables), generating revenue through participating in grid contracts when not required for EV charging, and even providing power resilience to protect sites from power failures.

Contact us if battery buffered EV charging could benefit your organisation

Over the last 8 years, the market has seen the demand for electric vehicles (EVs) in the UK increase significantly, with new registrations rising from 3,500 in 2013 to over 383,000 at the end of October 2020.

As the need to lower carbon emissions in the UK heightens, the transition from solely internal combustion engine (ICE) vehicles to hybrid or fully electric vehicles (EVs) accelerates.

The race to achieve net zero, and mitigate the most damaging effects of rising global temperatures, means that companies are facing enormous changes in how they operate.