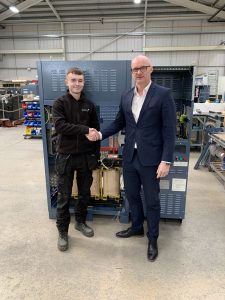 Powerstar apprenticeships are helping drive the company forward by bringing new energy to the business, and apprentices will make up the skilled energy industry leaders of the future. This blog explores how one of Powerstar’s apprentices in electronics and manufacturing, Joshua, is progressing in their role.

Apprenticeships enable people to work whilst studying, and are a way to gain the skills, knowledge and experience needed to forge ahead in careers. They combine work, training, and study, and are available for people aged 16 and above, predominantly undertaken by young people, following school or college.

At its core, Powerstar values its staff and focuses on driving innovation through investment in people, exemplified by its ongoing colleague development activities, its continuing involvement in knowledge transfer partnerships (KTPs) and its development of the dedicated, state of the art, £0.5m Delta Lab research and development department.

By providing apprenticeships, Powerstar is training and developing the next generation of engineers and leaders in smart energy technologies, who will be crucial in driving forward the changes needed to tackle the energy and sustainability challenges the world faces.

Joshua started his apprenticeship in autumn 2019, and says that he is “really enjoying it so far, and learning new things at a faster pace than expected” as a result of having the opportunity to combine on the job experience with recognised qualifications.

Joshua’s journey began with a self-driven search to find an industry role that matched his aspirations, proactively contacting companies, looking at Government advertised schemes, and applying for roles that he felt would benefit his development and be a good career pathway to take.

Joshua was selected for an interview with Powerstar Chief Operations Officer, Lee Hudson. Despite generally finding interviews quite intense, something that people at any stage in their career can relate to, Joshua felt confident and believed the process had gone well, which was reinforced by Lee when he was subsequently offered a position as part of the Powerstar team.

In his role, Joshua carries out a range of tasks and works hands-on alongside other members of the team. He always considers how the activities he is involved in contribute to furthering his knowledge, by talking to and learning from colleagues. He has also expanded his knowledge of electrical components as a result of working on Powerstar’s smart solutions.

As a manufacturer of smart energy solutions, the apprenticeship comes with real responsibility for carrying out practical work to the highest standards, a challenge which Joshua relishes. His role includes accurately marking out work to be done, developing key skills such as drilling and wiring, and becoming trained on a range of machinery. As a result of this, Joshua’s job differs from day to day and has become his own, something which will contribute towards achieving his own aspirations in addition to the overall goals of the team, and the company. 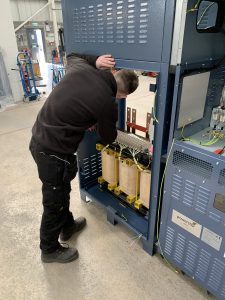 When asked about the best aspects of the role, Joshua highlighted the guidance and support he has received from other members of the team that help him continue his development, and the varied nature of the work, that makes every day interesting and exposes him to a wide range of experiences.

Commenting directly, Joshua stated that “I’ve had a great start to my apprenticeship at Powerstar, it is great to be able to learn and apply new skills, and feel like my work is really valued. Working alongside my colleagues that are experts at what they do gives me confidence to try new things.”

Overall, Joshua says he is very pleased with his choice to do an apprenticeship with Powerstar, and would certainly recommend it for anyone else considering the same. His main piece of advice to others would be to go and seek out opportunities, and seize them when they are available.

As an advocate of the process having trained many of our key personnel through similar routes, Lee Hudson suggested “The attitude, commitment and growth of individuals such as Joshua is a testament to the apprenticeship programmes that makes it a very valuable and rewarding experience for businesses to undertake. I wish Joshua every success in his future and we hope he will stay with Powerstar for years to come.”

To find out more about apprenticeships at Powerstar

During this month’s coffee break, we caught up with one of Powerstar’s newest team members, Daniel Mardapittas, who joined Powerstar in 2020. Here’s what Daniel had to say…

During this month’s coffee break, we caught up with Jazmine Walker, who was worked for Powerstar for 5 years within different areas of the business. Here’s what Jaz had to say…

During this month’s coffee break, we caught up with Alastair Morris, Powerstar’s new Chief Commercial Officer.

During this month’s coffee break, we caught up with Powerstar’s non-executive chairman, Ian Parker, who started working with Powerstar at the beginning of 2020. Here’s what Ian had to say…