With the battle against climate change and the pace of the energy transition towards cleaner renewable energy sources intensifying, growing numbers of companies are aiming for carbon neutrality.

Whilst it is recognised there are many methods for businesses to approach this, from purchasing carbon off-set to banning carrier bags, an increasingly popular way of achieving a genuinely sustainable operation is through investment in leading edge battery energy storage technologies, such as Powerstar VIRTUE.

The reason such energy storage solutions are thought to be so effective at helping organisations become carbon neutral is due to the multitude of benefits it can provide.

Perhaps the most notable advantage is the ability to soothe the problems of renewable energy. It is well known that renewable energy, such as solar or wind, are green sources and preferable to the traditionally used alternatives such as fossil fuels. However, it is also the case that renewable sources can be less reliable due to their naturally intermittent nature as solar or wind power only generate energy when the weather conditions allow it to do so, such as particularly sunny or windy days. This results in stark imbalances between the energy generated and consumed, with little to no generation on some days where weather conditions are not optimal and the potential for generation in excess of requirements when the weather conditions are well-suited to the renewable source.

Energy storage represents a clear solution to this issue. This is because energy storage solutions have the ability to store the excess generation and time-shift it for use at a later date, which is likely to be a period of time when the weather conditions are not ideal relative to the renewable source being used, meaning energy from the grid, and potentially more carbon intensive forms of generation, would then be required to make up the deficit and meet the demand for the site it is deployed on. When set up and optimised effectively, energy storage technology can be used in this way to maximise renewable generation to reduce, or in some cases completely remove, reliance on the grid and other carbon intensive energy sources, allowing a site or business to operate entirely on renewable energy.

Therefore, investment in energy storage technology for this application indicates that an organisation is set to maximise its renewable array and therefore will lower its carbon footprint and approach true carbon neutrality. 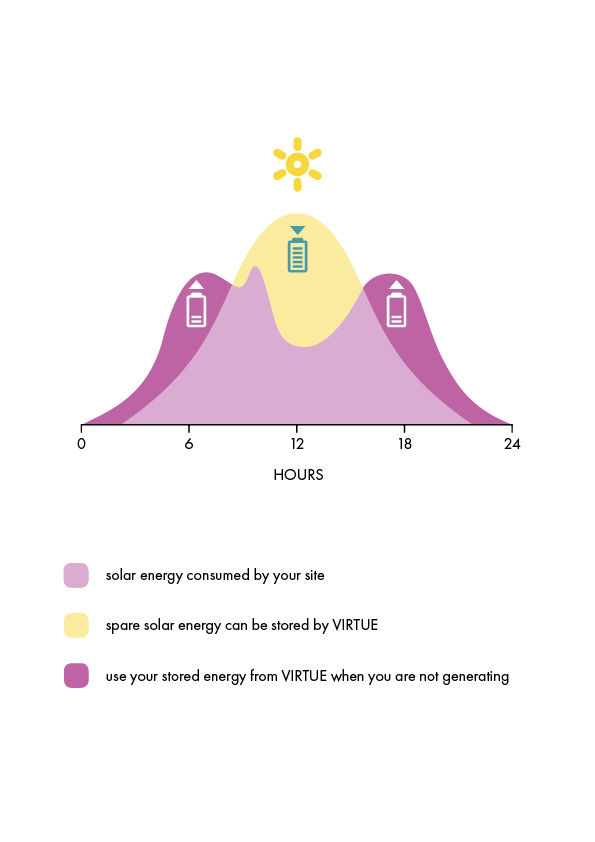 The above graph demonstrates how solar (PV) arrays can be optimised using energy storage to store energy generated at peak times, and then used at peak consumption periods.

The above graph displays a real-life application of one of Powerstar’s VIRTUE assets and how the site minimised import from and export to the grid following the installation of Powerstar VIRTUE. This lower reliance on the grid was possible due to energy storage asset enabling the site to maximise use of its large renewable capacity by firming its renewable generation to ensure that batteries supported demand during times of low on-site generation, and minimised wasted energy when generation was high by diverting that energy to charge the batteries for use at a later time.

It is clear that as the energy transition progresses and an increasing number of organisations are pressured to become carbon neutral that they will aim to use renewable energy as much as possible. Leading edge energy storage solutions, such as Powerstar VIRTUE allow for renewables to be maximised and enables companies to make exponential progress towards their carbon neutrality targets, whilst maximising the benefit of renewable assets, such as solar (PV), in the process.

How to Use Energy Storage to Achieve Net Zero

Every type of business has a responsibility to improve daily operations to reduce carbon emissions. The Government is also putting more pressure on certain industries to be more aware of their carbon footprint and to become more environmentally friendly.

What is on-site energy storage and why is it beneficial?

Reliable access to electricity is necessary for the majority of modern businesses, being used day in day out to keep everything running smoothly.

Why Battery Storage Could Be the Key to Unlocking EV

British businesses now have less than 10 years to prepare for the forthcoming EV revolution, with the sale of new petrol and diesel models set to be banned by 2030.