The Current and Future Cost of Energy Part 1 (Industry Insight)

Energy is a growing cost to businesses, whether an office building or large-scale manufacturing facility, minimising its impact is something that all businesses strive to do. Whilst the term sustainability is a key focus in the media, only 18% of energy managers say it is their first priority, with half stating that saving money is their primary concern [1].

There have been positive strides made in the adoption of renewable forms of electricity generation, and many organisations have implemented strategies to reduce their carbon footprint. Looming above all, however, is the pressure to keep energy costs under control and stay competitive. The UK’s commitment to reduce emissions to net zero by 2050 will require significant changes across all industries to be made that will undoubtedly have an impact of the cost of energy.

Since 2005, industrial electricity prices have risen This coupled with an already challenging economic environment for businesses to navigate over the period has put huge pressure on energy managers. In this Industry Insight drawing from the 2019 BBC Energy Briefing, Powerstar looks at the current cost of energy and the factors that have steered it to this point.

The current cost of energy

The standout figure from the BBC Energy Briefing 2019 is that the UK has among the highest industrial energy costs. This is due, in part, to higher costs passed to industry through Government legislation, e.g. to fund renewables and promote efficiency, whereas other countries more heavily subsidise these costs. Levies in the UK to ensure supply availability and support the renewables include capacity costs, contracts for difference, feed-in tariffs, and renewables obligation. This can be a difficult obstacle for UK businesses trying to compete internationally.

The rate of change in the UK as a result of technological innovations and a transformation in the way energy is generated, stored, and distributed is exemplified by the rise in the cost of operating the grid, which rose more than 60% in the 5 years to 2019. These costs have arisen from the necessary modifications to infrastructure for the switch from coal to renewables, and from the migration from using few large generators to a greater number of smaller, more widely dispersed ones.

As the below graph shows, industrial electricity prices have risen steeply since 2005, in line with the trend of many other major economies, but currently 40% above the International Energy Agency (IEA) average of 30 large energy-using countries, and double that of the USA. This has had a real impact for UK based businesses such as Tata Steel, which blamed 720 job cuts on ‘cripplingly high electricity costs’ [4]. 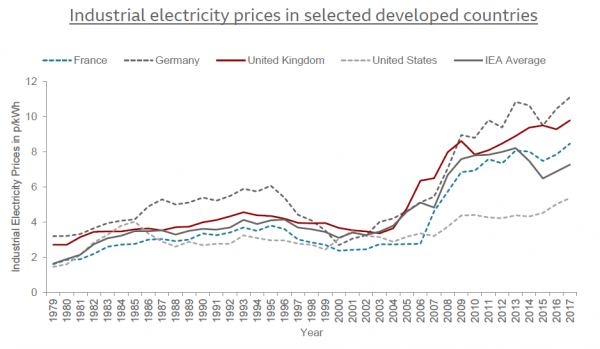 However, there is hope as the levies will help expedite new renewable power sources, such as offshore wind farms, which will produce cheaper energy when they come online in the early 2020s, and future renewables will not need such levies to aid their introduction. That being said, for the next few years, most of the UK’s renewable energy will still include pre-2018 levies despite the marginal costs from some renewable sources, such as solar and onshore wind, already being below the fossil fuel alternatives. These factors suggest that prices are reaching their peak, and will at least level off, potentially declining over time. There is more uncertainty to come as additional future factors are introduced.

The future cost of energy

The levies to help introduce renewable generation sources discussed within the current cost of energy section may be phased out in the coming years, but the UK is less than halfway to meeting its 2050 zero carbon target [2]. It is estimated that the total cost will be a trillion pounds [5]. It is not yet known how the cost will be divided between Government, households, and industry,

Some of the necessary changes around energy in the move to net-zero carbon are likely to be [2] made up of heat, and transport which alone accounts for 40% of the UK’s greenhouse gas emissions:

Undertaking these projects quickly at a vast scale will inevitably come at a considerable cost, which although will help reduce the longer-term severe costs of climate change, will pose challenges for the Government, businesses and consumers. Not least the uncertainty of when and how these changes will be carried out.

Looking at electricity generation, National Grid projections show that although of renewable electricity generation are reaching maturity, and are now being implemented subsidy free, they will have to play an even greater role in the future, requiring yet more investment. Carbon capture and nuclear power are widely tipped to be key aspects of the future generation strategy, although the latter has considerable opposition and faces uncertainty. Hinkley Point C, a new Nuclear development in Somerset, has attracted criticism for being delayed and over budget [6], and as the agreed price of the power produced by the site is already being undercut by sources such as offshore wind, this may slow down the expected fall in energy costs. The impact of Brexit on regulation, the interconnectedness to the EU’s Internal Energy Market (IEM), and the Euratom Treaty is also yet to be seen.

It is clear that numerous factors will have an impact on the cost of energy in the future. The BBC’s Briefing identified the below key factors that could reduce and increase costs [2].

It is clear that there will be a considerable impact made by the switch to new technologies and renewable sources, but also that the cost of implementing these is going to be substantial, and dependant on future policy. Large energy using businesses may end up bearing the brunt of a considerable part of this.

April’s Industry Insight explored how major oil and gas (O&G) companies such as BP, ExxonMobil and Shell were responding to industry shifts and a global cultural re-evaluation towards traditional energy sources and electrical consumption.

Energy consumption is changing, both in the way it is consumed and viewed, particularly as organisations are now broadening their understanding around the ‘power’ of energy.

As a long-standing market leading brand of voltage optimisation technologies, it is important to us to receive independent reports from the external testing of our solutions.

Powerstar apprenticeships are helping drive the company forward by bringing new energy to the business, and apprentices will make up the skilled energy industry leaders of the future.